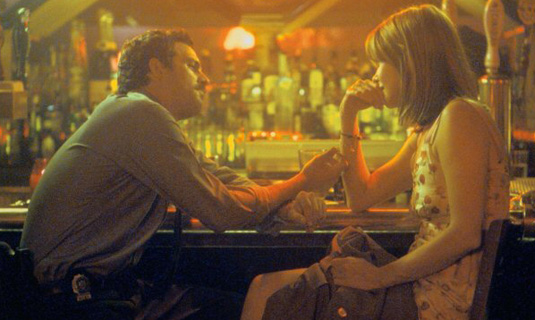 There’s some disagreement about whether In the Cut is a thriller or not. It was certainly marketed that way, and I feel pretty certain that’s the way the filmmakers pitched the project. Jane Campion had enjoyed critical and commercial success with The Piano, but her next two films got mixed reviews and did poorly at the box office. My guess is that she decided to play it safe and make a genre film about a serial killer in order to improve her track record in Hollywood. The funny thing is, Campion doesn’t know how to play it safe. She’s always pushing the limits, and with In the Cut she pushed them way beyond what critics and audiences were willing to accept. She may have set out to make a thriller, but instead she made a darkly sensuous, deeply disturbing movie that’s about as far from the standard Hollywood murder mystery as you can get.

Anyone who watches this movie expecting a thriller is going to be totally disappointed. In the Cut isn’t just another movie about a serial killer stalking women. In fact, Campion isn’t even interested in the mechanics of making a suspense flick. Rather than giving us a routine genre film where the women are basically just bait, she broadens the concept to include the everyday violence that men commit against women, whether it’s verbal, emotional or physical.

The main characters are half-sisters, Frannie and Pauline, played by Meg Ryan and Jennifer Jason Leigh. They had the same father but different mothers, and this is the psychic crux of the whole movie. Their father married four times, apparently going from one woman to another, and both daughters are still dealing with the damage, still carrying the hurt of having been abandoned. Throughout the film we see scenes of a fantasy courtship, Frannie’s mother and father meeting and getting engaged as they ice skate in a wintry landscape. The images have a fairy tale feel, but that doesn’t mean there will be a happy ending. In fact, by the end of the movie we see that this story is as brutal as anything set down by the Brothers Grimm.

Actually, the whole film is a fairy tale. Symbols abound, and Campion isn’t shy about the way she uses them. New York City becomes a whirling surrealist landscape filled with floating petals, flowery hearts, jeweled rings and tall red lighthouses. As in a fairy tale, the half-sisters are complete opposites. Frannie is a repressed college teacher who lives in a world of words. She isn’t afraid of men, but she is determined to keep them at arm’s length. Her sister Pauline is completely uninhibited and embraces the sensual side of life, going from one man to another looking for love.

In the Cut isn’t pornographic, and it’s not erotic either. Campion finds a space between the two, and it’s an uncomfortable space. The sex is unusually explicit for a Hollywood movie, but it doesn’t exploit sex the way many commercial films do. At the same time, the scenes that show Frannie and Molloy making love aren’t really a turn on. There’s a current of tension that runs through every scene, and the threat of violence always seems to be lurking just beneath the surface. This isn’t just because the film is about a serial killer. Bloodshed and death seem to find their way into even the most casual conversations. The film starts with the sisters talking about how slang words are either about sex or violence or both. The macho banter of the two cops reduces women to nothing more than a hole. Frannie meets with one of her students and he talks obsessively about John Wayne Gacy.

Campion creates this dark, disturbing world with the help of some gifted collaborators. Production designer David Brisbin and art director David Stein give us an expressionist New York defined by dirty reds and fetid greens. Cinematographer Dino Beebe takes this palette and uses it to help define the film’s murky, ambiguous mindscape. And the images are complemented beautifully by Hilmar Örn Hilmarsson’s abstract, brooding score. Technically, yes, the film is a mystery, because it’s about the search for a killer. But on a deeper level, it’s truly mysterious. Campion isn’t afraid to show us a world where conflicting emotions lead people into random, impossible relationships and feelings that can’t be resolved. She isn’t telling us to embrace sex or to try and escape violence. She seems to be saying that both are part of life. And that we should get used to it.