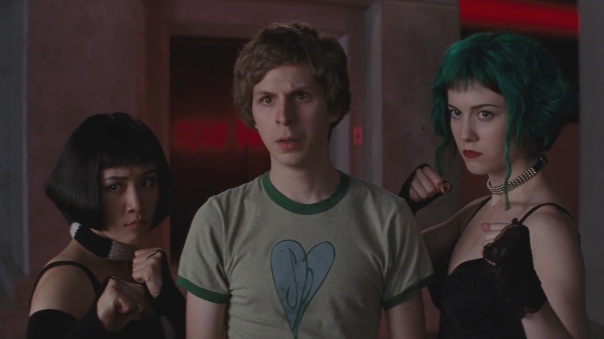 Edgar Wright made a name for himself with funny, fast-paced send-ups like Shaun of the Dead and Hot Fuzz. The first poked fun at zombie flicks and the second was a dead-on parody of the action genre. Obviously the guy has grown up addicted to movies. He has a remarkable gift for taking images and sounds we’re all familiar with from pop culture and splicing them together into giddy, intoxicating confections. Scott Pilgrim vs. the World is a dizzying mix of teen romance, slapstick comedy, pop music and over-the-top action. It’s like Wright is channeling Buster Keaton for the iPod generation.

Scott Pilgrim satirizes its subject at the same time that it’s giving it a big warm hug. The characters all live in a swirling pop culture universe where ordinary physical laws don’t apply. Characters move through three or four different settings in the course of the same conversation. Written words fly across the screen. Doors appear out of nowhere. And Wright pays as much attention to sound as he does images. He underscores the action by weaving together an intricate collage of ethereal voices, grating static and video game chimes. Most of it slides by without our being “consciously” aware of it, but Wright knows that it’s still having an impact. He understands how important sound is to the rhythm and the texture of a film.

When we first meet Scott, he’s an arrogant little jerk. Totally self-absorbed, he expects the world to revolve around him, and seems baffled when it doesn’t. Completely insecure, the smallest slight sends him into depression. But he meets a girl he really cares about, and she makes him raise his game. He realizes that if he’s going to be with her, he has to fight for her. It’s a standard coming of age story, but Wright tells it with a light touch and a wicked sense of humor. It may not be deep or heavy, but it is heartfelt.

Once more, we find Michael Cera playing a clueless nerd, and once more, he somehow makes the character interesting and engaging. He is truly obnoxious during the first part of the movie, but as he slowly, painfully starts learning what it means to take responsibility for his life, he starts to earn your respect. It helps that Cera has an amazing supporting cast to back him up. And Wright again deserves credit for the way he handles the actors. All the performances are stylized to fit the movie’s tone, but they’re not flattened out, as is so often the case when people try to make comic strip movies. All the characters are bursting with energy, and it’s hard to single anybody out because they’re all so enjoyable to watch. Kieran Culkin is razor sharp as Scott’s gay roommate Wallace. Ellen Wong somehow manages to make a character named Knives believable, first as an absurdly innocent schoolgirl, and then as Scott’s insanely jealous ex-girlfriend. As Gideon, Ramona’s rock producer ex-boyfriend, Jason Schwartzman is so unctuously hip that you want to punch him. He’s great. And while everyone else is freaking out or falling apart, Mary Elizabeth Winstead brings a low-key vibe to the part of Ramona, sort of like the calm at the center of the storm. She has a matter-of-fact openness that stands in stark contrast to Scott’s raging insecurity. You can see why he’s drawn to her, and also why she’s such a huge challenge for him.

Scott Pilgrim tanked at the box office. According to the IMDB it only earned thirty million in its US release, but most of the people I know who saw the movie loved it. I wouldn’t be surprised if in five years or so it’s considered a cult classic. It’s probably not for everybody, and no doubt plays better with younger viewers. But it is a legitimately awesome flick. It seems like most of the comedies that get released these days are competing to gross us out. What a welcome surprise to see a smart, stylish comedy that relies on wit and imagination.

If only we could clone Edgar Wright.