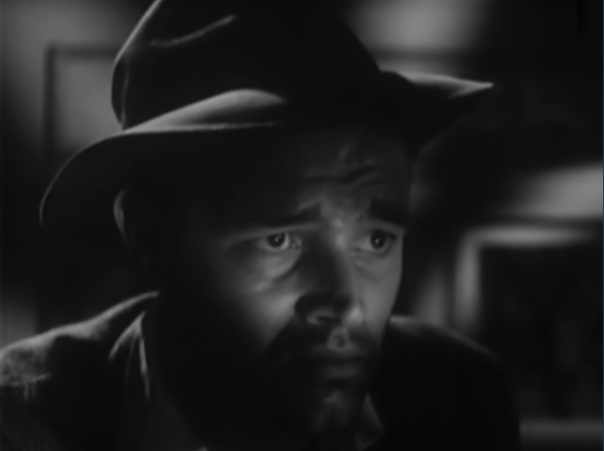 The movie Detour has long been considered a film noir classic. Reams have been written about director Edgar Ulmer’s amazingly terse, unnervingly intense exploration of alienation and despair on the lonely stretches of the American highway. Ulmer was certainly a gifted filmmaker, and Detour is one of the high points of his career, but it’s odd that in the seventy years since it was made, almost nobody has talked about the novel it was based on.

The novel Detour was published at the end of the thirties, and in many ways seems to be a distillation of the period it was written in, the tail end of the Depression. Like Alex Roth, the luckless musician at the center of the story, author Martin Goldsmith had spent some time hitchhiking, no doubt getting well acquainted with hunger and hardship. The film’s screenplay is also by Goldsmith, and almost everything in it comes directly from the book. It’s an unusually faithful adaptation.

There are some major differences. In turning his slender novel into a surprisingly spare film, Goldsmith cut one of his characters almost entirely. While the book is framed by Alex’s story, starting and ending with him, the chapters he narrates alternate with chapters narrated by his girlfriend, Sue. The two met and fell in love working at a club in New York. Determined to become an actress, Sue left for Hollywood, postponing their marriage indefinitely. Desperately lonely, Alex decided to hitchhike to LA so he could rejoin his girlfriend. The book goes back and forth between the two of them, giving us an intricate portrait of their tangled relationship.

While Alex and Sue are basically decent people, they’re both driven to degrading acts by loneliness and lack of money. Goldsmith lets them explain themselves in their own words, and their stories are a mix of desperate self-deception and brutal honesty. Alex knows he’s basically a bum, but he can’t let go of the idea that some day he’ll become a successful musician. Sue realizes she’s just another star-struck fool scraping by as a waitress, but she keeps telling herself that somehow she’ll break through in Hollywood. They’ve both done things they’re not proud of and spend a good deal of time trying to justify their actions. Bottom line, neither one of them is perfect, and they know it all too well.

In the movie Sue is pretty much gone after the first reel. The screenplay gets her out of the way to focus on the poisonous relationship between Alex and Vera. This makes sense for a commercial feature, but it also makes the movie more conventional. Part of what makes Goldsmith’s book so interesting is the audacity of using a pulp thriller to dig into the maddening contradictions inherent in most relationships. Making Vera the central female figure brings the movie much more in line with the classic pulp framework, a more or less innocent guy dragged down by a scheming femme fatale.

Another interesting aspect of Goldsmith’s adaptation is the fact that he cuts out all of his rants about Hollywood. In the movie, pretty much all we see of Tinseltown is a series of rear projection shots, and the characters only refer to it in passing. In the book, the author spends pages describing his characters’ reactions to film capitol, and gives us a fairly detailed account of what it was like to live in the community at the end of the thirties. Goldsmith was living in Hollywood when he wrote Detour, and it’s clear that he was both horrified and fascinated by the place. His characters have wildly different reactions to what they see there. Alex arrives in Hollywood and likes it right away, describing how clean and sunny everything looks, admiring the people who look so healthy and tanned. But Sue, who works as a waitress because she’s had no luck with the studios, is bitterly angry that she was foolish enough to believe the hype. “I had arrived so thoroughly read-up on the misinformation of the fan magazines that it took me a full week before I realized that the ‘Mecca’ was no more than a jerkwater suburb which publicity had sliced from Los Angeles….”

The movie is just as relentlessly cynical as the book, but in a different way. Born in Vienna at the beginning of the twentieth century, Edgar Ulmer was steeped in the northern European traditions of romanticism and expressionism. Before he started his career as a director, he had worked as a designer in stage and film, assisting Max Reinhardt, Fritz Lang and F. W. Murnau. In making a film out of Detour, he brings a significant shift in emphasis. Goldsmith’s book is rooted in gritty reality, and in their moments of honesty the characters acknowledge that their lives were shaped by the choices they made. In contrast, Ulmer’s movie is about an innocent man whose life is completely derailed by fate. He has no choice. And there is no escape. 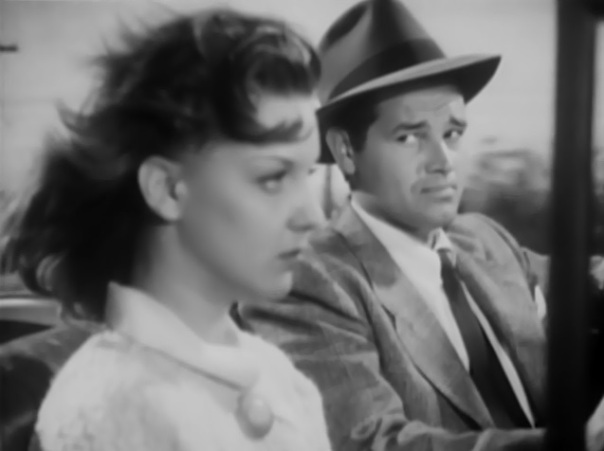 Ulmer spent most of his career working on low-budget and no-budget productions. At the time he made Detour he was under contract at PRC, possibly the cheapest outfit in Hollywood at the time. Most of PRC’s output was shot in six days and cut in one, an outrageously short schedule for making a feature film. In spite of these extreme limitations, Ulmer charges the movie with powerful imagery, making the visuals more striking and expressive than almost anything the major studios were doing at the time. Whether hitching a ride through the burning desert or brooding over a cup of coffee in a tiny diner, Al Roberts* is travelling through a dark psychological landscape. It often feels like the movie is taking place in his mind. Al is briefly enraged by a jukebox song that reminds him of his girlfriend. When he calms down again, the camera dollys in quickly to a tight close-up and the frame suddenly grows dim except for a small patch of light illuminating his eyes. Ulmer has no qualms about using a blatantly artificial effect to show the character’s emotional state. When Al stands over Vera’s corpse on the hotel bed, we see the room from his perspective, the camera panning slowly over various random objects, bringing them briefly into sharp focus, then allowing them to go hazy. We’re brought into the room with him, we share his feeling of stunned disbelief.

Another major difference in the movie is the way Vera dies. In Goldmsith’s novel, Al is so maddened by anger and fear that he strangles her when she tries to call the cops. It may not have been premeditated, but it’s definitely murder, and while Al is shocked by what he’s done, he doesn’t spend much time mourning. He runs. In the movie Vera’s death is definitely accidental. Having decided to call the cops, she grabs the phone, runs into the hotel bedroom and locks the door behind her. In total panic, Al grabs the cord and pulls with all his might, hoping to rip it out of the phone. Then he breaks down the bedroom door and finds Vera dead, the phone cord wound around her neck. There’s no knowing how this change came about. Did Goldsmith alter the scene on his own? Did Ulmer ask for something different? Was the production code a consideration? Whatever the reasons for the change, it definitely alters our perception of Al’s story. In the first version, he’s a murderer, even if he didn’t consciously choose to kill Vera. In the second version, he’s a helpless victim of forces beyond his control. After Haskell’s sudden death, Al’s chance encounter with Vera, and then her death in a freak accident, there’s no question that fate has taken a hand. He can run but he can’t hide. It’s only a matter of time before the darkness closes in.

Tom Neal has a forlorn charm that’s perfect for Al, an ordinary guy who’s trapped by an extraordinary set of circumstances. He just wants to get by, and at first he thinks everything will be okay if he just plays it cool. As things get worse and the pressure grows, Neal shows us Al’s nerves go from ragged to raw. He goes from ranting and raging to bargaining and begging, desperately trying to claw his way out of the mess he’s in. As Vera, Ann Savage burns a hole in the screen. It’s easy to believe that Al’s afraid of her. She’s a bottomless pit of anger and bitterness, and her intensity is scorching. But unlike the book, the movie gives us brief glimpses of another side of Vera. In her own way, she’s just as lost as Al. Vera’s led a hard life and probably doesn’t have long to live. In the few moments that Savage lets us see flashes of insecurity and desperation, it makes the character more than just another femme fatale. She seems vividly, pathetically human.

In the book, Alex manages to evade the law, but he can’t go home and he can’t go back to his girlfriend. He’s haunted by the memory of Sue, and tormented by the fact that his musical career has ended before it began. Goldsmith leaves Al stuck in limbo, bumming rides from one small town to another, earning a buck whenever he can. Still, he keeps moving forward. Life goes on. Ulmer’s ending is much more bleak. Al may have momentarily slipped free of the hangman’s noose, but he knows it’s only a matter of time before he’s caught. It’s not just bad luck that’s sent him on this detour. A mysterious force has singled him out, and there is no escape. When the highway patrol car pulls up alongside him at the end, he doesn’t struggle or try to run. He meekly steps inside. Because he knows it isn’t the police taking him down.

*
In the book the character’s name is Alex Roth, but in the movie it’s changed to Al Roberts, no doubt because nice “normal” Anglo names were always preferred for Hollywood heroes. 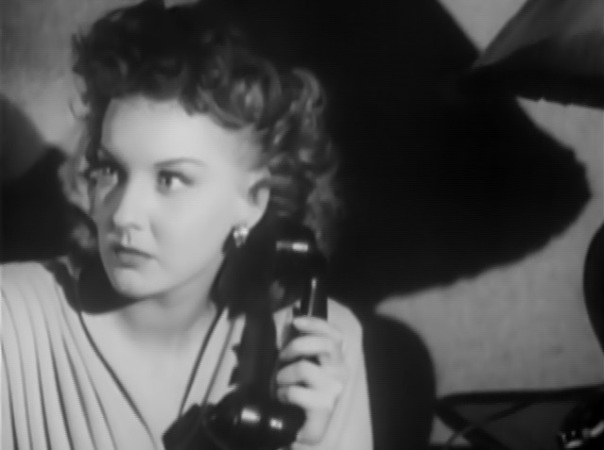 Getting ready to drop a dime.