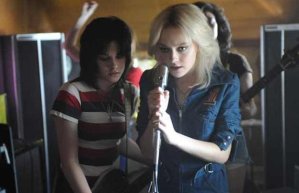 There was a lot of cool music being made in LA in the seventies. The Runaways were an important part of the mix, not only helping to pave the way for the local punk scene but also breaking down barriers for women who wanted to play rock. The band’s brief career is the perfect subject for a movie because their meteoric rise and fall is a classic pop myth. The amazing thing is that so much of the myth is actually true.

As the film tells it, this is the story of teenage girls discovering their sexuality and finding their voices. From the very first shot writer/director Floria Sigismondi establishes that the movie is about coming of age, and she doesn’t shy away from the messy details or the uncomfortable moments. Sigismondi has a natural feel for images, and uses the visuals to express what the girls are going through. No doubt her experience directing music videos serves her well in the heated up, hyperkinetic scenes where the band is touring and performing. But unlike some other filmmakers who cut their teeth making videos, she also knows how to shoot a quiet conversation. In fact, some of the film’s most powerful and most painful moments are just about two people talking.

Which brings us to the acting. Kristen Stewart and Dakota Fanning are both excellent as Joan Jett and Cherie Currie respectively. But it’s also important to say that Stella Maeve and Scout Taylor-Compton give strong, tough performances as Sandy West and Lita Ford. The film wouldn’t be as vivid or as lively if the whole band wasn’t putting out the same level of energy. In describing Michael Shannon’s performance as Kim Fowley, some people have used the phrase “over the top”. I want to know how anyone could possibly portray Kim Fowley without going over the top? While the rest of the cast certainly delivers the goods, it’s important to single out Riley Keough as Marie Currie. There’s a lot that goes on between the two sisters that isn’t expressed in words. It’s a complicated relationship, involving anger, envy, resentment and love. Fanning and Keough manage to put all that across, sometimes without even saying a word.

The story jumps back and forth between the tawdry, drab world of the San Fernando Valley and the tawdry, exciting world of Hollywood and the Strip. The filmmakers don’t just highlight the contrast between these two sides of LA, they push it to the max. This is important, because Cherie Currie’s story is about embracing the excitement of being a rock star to avoid the dreary weight of family obligations. When she visits the tract house where her sister is caring for her alcoholic father, it’s easy to see why Cherie wants to escape the bleached-out reality of life in the suburbs. Sigismondi and cinematographer Benoît Debie contrast the flat, bland colors of the valley with the burning reds and blues of the club scene on the other side of the hill. At times the director pushes the film into a kind of pop expressionism to match the intensity of what the band members are feeling. Joan Jett says she doesn’t recall ever hanging out under the Hollywood sign, but there’s a wild poetry in the image of these teenage girls lounging on the hillside, dwarfed by towering white letters. It may not be based on fact, but it certainly evokes the spirit of the time.

The film does an amazing job of conjuring up LA in the seventies. No doubt this is in large part due to the efforts of production designer Eugenio Caballero and costume designer Carol Beadle. Because the director uses images to tell the story, a lot of what we know about the band members comes from the way they dress, the way they wear their hair. When Joan buys a leather jacket at the beginning of the movie, it’s because she wants to change who she is. At the end of the movie, during a radio interview, we see her in the bright pink jacket worn on the cover of her first solo album. The real Joan says in the audio track that she wore the jacket for a photo shoot and probably never again. No doubt, it is important to draw the line between fantasy and fact. For the most part The Runaways stays close to the truth. But again, Sigismondi understands the power of the visual. While the clothing may not be literally accurate, the pink jacket tells us that Joan has changed again. She’s gone through the messy, joyful, painful years with The Runaways and come out stronger. She’s found her voice.

I’ve got to add a disturbing postscript. When The Runaways was released, I wondered why bass player Jackie Fox wasn’t depicted in the movie. I assumed it was either a dispute over money or the size of the role. Turns out it was much more serious. This article was just published on Huffington Post. In it, Fox accuses Kim Fowley of raping her, and while band members dispute her account of the event, the article cites others who were present and corroborate Fox’s version.

The movie tells a classic rock n’ roll story, five girls fighting tooth and nail to be taken seriously as a band, and finally breaking through. While the film mostly sticks to the facts in the incidents it shows, the problem here is what it leaves out. There’s no reason to believe that writer/director Floria Sigismondi knew about the rape allegations, but this shows how treacherous making a film “inspired by true events” can be.