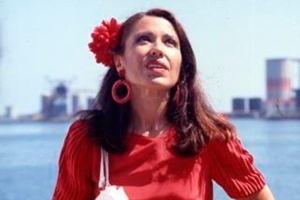 You’ve seen this story before. A middle-aged woman goes on a trip, has a brief fling with a guy, and then goes back home. There are dozens of movies that have used this premise. But in Danzón, it isn’t the story that matters. I get the feeling that director María Novaro isn’t interested in plot, she doesn’t care about drama. Her films are just about people. The characters in her films are vivid and lively, but never bigger than life. Novaro is most interested in the ordinary joys and sorrows of ordinary people. She wants to get as close to them as possible, moving right into their world, allowing us to see, to hear, to feel their lives unfold.

In the first frames we see a woman’s feet, clad in silver high-heel shoes, moving slowly across a dance floor as a band plays. The camera pulls back to reveal a large nightclub filled with couples, their arms posed in respectful embraces, their feet tracing short, precise movements in time to the music. This is el danzón. Originally from Cuba, this style of dance migrated to Mexico about a hundred years ago and has enjoyed huge popularity there. It is a very elegant, very formal ritual, and its devotees even adhere to a fairly strict dress code.

Every Wednesday night Julia comes to the Salon Colonia to dance with Carmelo. This is what she lives for. Julia is a single, middle-aged woman with a daughter who lives in Mexico City. During the day she works for the phone company as an operator. But she lives for el danzón. Her long-time partner, Carmelo, is a quiet, courtly man who seems to be at least ten years her senior. Though they’ve been dancing together for years, apparently their relationship doesn’t go beyond that. Then one day Carmelo disappears. Julia becomes depressed, frustrated, angry. Finally she decides to go looking for him in Veracruz, a port city on the Gulf of Mexico.

When Julia arrives in Veracruz the movie’s tone shifts. In Mexico City, a massive metropolis, everything is concrete and plaster, fluorescent and neon. In Veracruz we can feel the breeze rustling the trees, the sunlight warming the pavement. Novaro and cinematographer Rodrigo García make Julia’s wanderings in this port city a sensual experience. On the night of her arrival, one of the first things she does is walk down to the water. She smiles as the surf gently rolls around her feet. The pace of life seems to be slower in Veracruz. People seem to spend their days outdoors. Julia is still intent on finding Carmelo, but we can see her gradually relaxing in her new surroundings.

For the most part Novaro keeps the film firmly rooted in reality, but there is one extraordinary sequence that feels strangely unreal. Julia decides to go down to the port to ask about Carmelo. On her friend Susy’s advice, she’s wearing a sheer red dress, red earrings and a red flower in her hair. As she strolls past the workers, men turn to stare at her and she feels self-conscious. But then Julia comes to the docks, and her attention turns to the ships floating by. They bear names like Puras Ilusiones (Only Illusions), Lagrimas Negras (Black Tears), and Amor Perdido (Lost Love). A wistful song plays on the soundtrack, but there is no dialogue. Julia walks slowly along the docks as these massive ships drift past, and it’s almost as though her fantasies of love have taken shape in the gigantic vessels gliding across the water.

In playing Julia, Maria Rojo’s face is so open, so expressive, so naked that you feel like you can read every thought, every emotion. Julia is fragile and easily hurt, so she goes to great lengths to hide her feelings, and yet Rojo always allows us to see beneath the surface. At times it’s maddening to watch this woman pursuing her quest for a man she barely knows, but Rojo always keeps us on the character’s side, making sure we can relate to her.

As I said before, Novaro’s films are about people, and she fills the movie with a number of memorable performances. Margarita Isabel, Carmen Salinas and Víctor Carpinteiro all seem to live inside the characters they’re playing. Tito Vasconcelos is especially interesting as Susy, a man who dresses as a woman. Susy is excited by Julia’s romantic quest, but at times seems attracted to Julia herself. Rhapsodizing about love one minute, bitterly cynical the next, Susy appears to be intoxicated both by the joy and the sadness of life.

At the end, Julia returns to Mexico City, and Carmelo magically reappears. He doesn’t say where he was or why he went away. They simply start dancing again, and Julia is radiant with happiness. Nothing has been explained, nothing has been resolved. There’s no dramatic climax, no message to be gleaned from our heroine’s adventures. Life just goes on. And life is what Novaro is interested in. The director and her sister Beatriz, who co-wrote the screenplay, achieve something very close to what Vittorio De Sica and Cesare Zavatinni created in films like Bicycle Thieves and Shoeshine. They don’t create drama, they just dive into life. It’s enough for them to explore the joys and frustrations of friendship, the unpredictability of daily living, the beauty of the world around us.

You could take El jardín del Edén as a meditation on borders.  Not just the boundaries that separate nations, but also the lines we draw between ourselves and even the barriers we create inside ourselves.  Most of the film is set near the border between Mexico and the US, in and around Tijuana.  This is a place where different cultures come together, sometimes merging in a happy chaos, other times grinding against each other and shooting off sparks.  Labels like “Mexican”, “American”, “Indigenous” start to lose their meaning.  It all depends on your perspective.

The film centers on three women who have come to Tijuana, each for different reasons.  Liz is a Mexican-American woman working on an exhibition about cultural identity.  Her friend Jane is Anglo and speaks almost no Spanish, which doesn’t stop her from trying to be friends with everyone she meets.  Serena is a single mom who is struggling to make a living and trying to deal with her teenage son.  The script, by director María Novaro with Beatriz Novaro, doesn’t try to fit these women into a standard dramatic framework.  The film isn’t about drama.  It’s about people trying to find a way to live their lives.

Novaro seems to be as interested in the place as the people.  She takes the time to dwell on details that give us a feel for the city.  The cinematography captures the tacky beauty of the border, the dusty landscapes and cheap hotels.  English and Spanish collide and mutate in garish neon and hand-painted signs.  While the movie doesn’t have a traditional score, we hear music all over the place, in dance halls, border camps, and on the street.

References to Eden and paradise come up throughout the film.  Is paradise across the border?  Is it right here inTijuana?  Or does it exist on some other plane?  Novaro doesn’t answer these questions.  Instead she follows these people who want to find that perfect place, but don’t know how to get there.