Two women, one young, one middle-aged, sit in a sauna, relaxing after a workout. The older one starts talking about the first time she had a hot flash, in a football stadium, surrounded by men, on a freezing cold day. And it wasn’t until she’d taken off most of her clothes that she figured out what was happening. She tells the younger woman, “It’s like suddenly realizing you’ve been made a different person, and no one’s ever asked you.”

The older woman is Julie. She’s worked in the corporate world for years, struggling to build a career. Early on we learn that she’s just been made CEO of the company she works for. But her reaction on hearing the news is decidedly muted. She seems to be at a loss. Where most people would start imagining their glowing future, Julie starts thinking about her past. She can’t help wondering what her life’s been about.

The Business of Strangers follows Julie as she thinks about the choices she’s made. And the younger woman, Paula, is there to make her think hard. They start off on the wrong foot when Paula, an employee, blows a big meeting. After learning that she’s become the CEO, Julie is feeling generous and tries to make peace, but it’s not easy. In many ways these two are complete opposites. The one way they’re alike is that they both want to be in control. 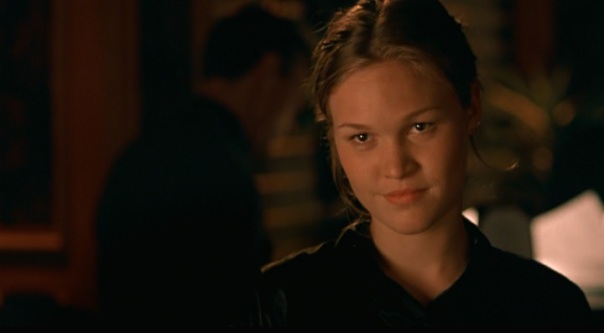 But their increasingly twisted relationship isn’t just about clashing egos, it’s not just a struggle for power. They need to be in control because they’ve spent so much of their lives being controlled by men. They both understand how hard it is for women to get power. They live in a man’s world, and they’ve had to fight to maintain their independence, Julie in boardrooms and Paula in bars. The younger woman is a footloose bohemian who both resents and respects the older woman’s discipline. Paula will complement Julie, at the same time as she’s looking for chinks in the armor.

Writer/director Patrick Stettner shows how much you can do with a limited budget and couple of actors. Not only has he created two fascinating characters, but the look and sound of the setting they’re placed in extends the emotional tone of the film. Most of the movie takes place in the arid landscape of a chain hotel. The bland, pastel décor and the eerily silent hallways are the perfect backdrop for Julie’s moody ruminations on her empty life. This world of sterile comfort only highlights the fact that she’s really homeless. Stettner’s subtle use of sound emphasizes the hollowness of the environment. We hear the dull buzz of conversation in the bar, the muffled padding of footsteps in a carpeted corridor. And he’s not afraid to use silence. As the film goes on, the passages with no dialogue are filled with more and more tension. Alex Lasarenko’s score is an important part of the sound design. The low-key percussive patterns he lays down in the background create a sense of quiet unease. 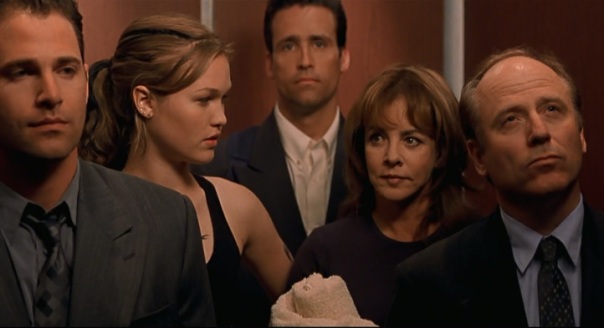 Then there are the performances. Julia Stiles shows how far she can go as an actress, playing Paula with shadings that you don’t even catch until the second or third viewing. While in some films Stiles’ face has seemed like a barrier, here it seems like a mask, and you’re never quite sure what’s going on underneath. You’re always a little afraid of what she might do next. Anybody who’s seen Stockard Channing before knows how far she can go as an actress, but she rarely gets roles this good. One of her greatest gifts is that she never seems to be acting. You never feel like there’s any distance between her and the character. She’s very direct, very straightforward, but she adds subtle layers of emotion. With the slightest change of expression or an offhand gesture she lets you see right into character.

At the end, nothing is resolved. Julie and Paula are back at the airport, sitting in the lounge, killing time before they go their separate ways. Paula will go off to find some new situation where she can explore the dark side of human nature. Julie will slide into the role of CEO, running meetings and reading sales reports. She may not be satisfied with her situation, but she’s accepted it. She’s realized that her work is who she is, and that all she can do is keep moving forward.

A different approach to dealing with men.