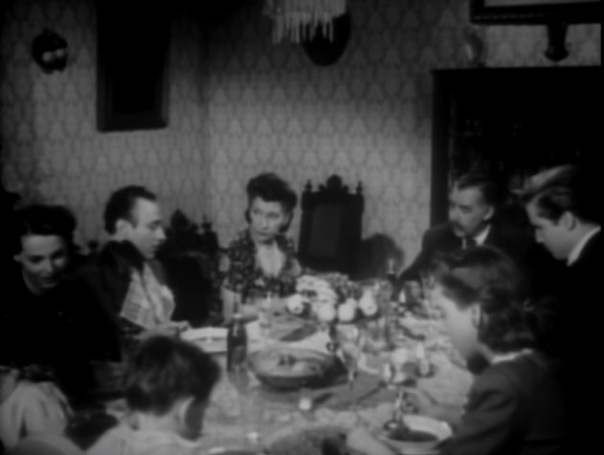 In the late forties Mexico was changing rapidly. Industrial growth fueled the economy. Thousands abandoned their farms for manufacturing jobs in the city, where construction was booming and mass media was becoming a part of daily life. Of course, all of this meant that the culture was changing, too, and the family was a central part of Mexican culture.

Buoyed by the booming economy, the Mexican film industry was riding high, and family dramas were a popular genre. A number of movies were made about the pressures that drove mothers and fathers, sons and daughters apart, but generally everything came together in a happy ending that reinforced the importance of traditional values. This was a Catholic nation, after all. If a son strayed from the straight and narrow, he had to repent. If a daughter disrespected her parents, she had to beg forgiveness. No matter how bad things got, order had to be restored before the music swelled up and the credits rolled.

It was unusual in this era for a Mexican filmmaker to question those traditional beliefs that supposedly held society together, but that’s exactly what Alejandro Galindo does in Una familia de tantas. In this film Galindo presents a portrait of a middle-class family living a comfortable life in Mexico City. He shows us first the rigid discipline that holds the family together, and then he shows us how that same rigid discipline tears the family apart.

The Cataños are a typical middle-class family of the period. The five children and their parents live in a large house which is run with an iron hand by Sr. Cataño. He dominates the household, insisting that all the proprieties be observed. A child is not to leave the room without permission. No one sits down at the dinner table without saying a prayer. When he gives a command the children scamper to obey.

And this rigid order is overthrown by a young man selling vacuum cleaners. This smooth-talking salesman with an answer for everything belongs to a new breed. Roberto is hard-working and ambitious, and smart enough to see the potential in the household appliances which are now becoming available to anyone with money to spend. He goes door to door, speaking with such glib assurance that his customers don’t know quite how to respond. He invites himself into the Cataño house when one of the daughters, Maru, is home alone, never thinking that this would be improper. He is only focussed on selling her a vacuum cleaner.

When Sr. Cataño finds out that Maru was alone in the house with a stranger he’s furious. After learning that this brash young man is coming back in the evening to seal the deal, Sr. Cataño can hardly wait for the encounter so he can overwhelm the intruder with outraged indignation. And when Roberto arrives, the self-righteous patriarch lays into him with an angry lecture. But he’s met his match. Roberto at first tries to politely calm the outraged father, but when it’s suggested his motives for entering the house were improper, he becomes outraged himself. And when he mentions that he’s supporting his widowed mother, Sr. Cataño is taken aback. The stern patriarch’s own values make him suddenly docile. Being a devout Catholic, he understands that respect for motherhood trumps everything.

And of course, he ends up buying the vacuum cleaner.

It’s important to say that Sr. Cataño isn’t fundamentally bad. He loves his children and wants the best for them. It’s just that he’s so completely immersed in the rigid culture that shaped him, he sees any deviation as a sin that must be corrected. Because his children are afraid of him, there’s a wall between them. When he talks, they listen. When he asks them a question, he will only accept the response he considers correct. As a result, he’s completely isolated from his own family. He has no idea what’s going on in their lives.

The story is centered on Maru, the young woman who was unfortunate enough to let a salesman in the house. She’s fifteen years old, and her family is her whole world. That world is dominated by her father. She would never think of challenging him. But then Roberto enters Maru’s life and her world starts to change. Roberto talks to her about his ambitions, his hopes, his fears, and she has no idea how to respond. No man has ever talked to her this way before. She’s completely stunned when he asks her what she thinks. No one has ever asked for her opinion.

Maru’s quinceañera, the celebration of her fifteenth birthday, is a hugely important event. As is traditional, Sr. Cataño throws an elaborate party to mark his daughter’s passage to womanhood. He dances the first dance with her, stiff and stately, but obviously proud of Maru. Afterward, he makes a dignified speech about the importance of this moment in a young woman’s life, and the responsibilities that she must fulfill. In his mind, her future is completely settled. He’s got it all figured out.

Unfortunately, this is where everything starts to fall apart. Maru is already is in love with Roberto, and deeply unhappy about the fact that Sr. Cataño has already chosen another suitor for her. But she’s shaken to the core when her father beats her older sister savagely over a suspected breach of propriety. From this point on she gradually realizes that she has two choices. She can go on living in fear, or she can run for freedom.* 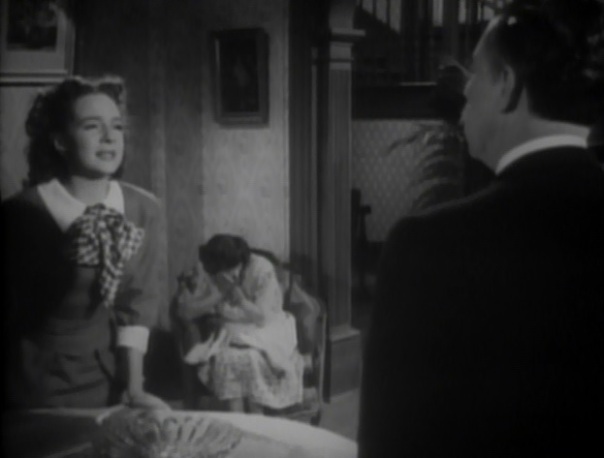 As Maru, Martha Roth gives a remarkable performance. Her transition from obedient child to defiant woman takes place in a very short time, but Roth makes it completely believable. Maru is riding an emotional rollercoaster, and we have to ride it with her. There are many moments when the film could veer off into melodrama, but Roth always keeps it real. David Silva seems completely at home on the screen, but without the self-consciousness that some stars betray. He has a presence that makes him the center of attention, and at the same time he’s completely absorbed in the role he’s playing. Roberto may be a fast talking salesman, but Silva shows us that he also has other sides. Eugenia Galindo plays Sra. Cataño expertly. She knows better than anyone the price for confronting Sr. Cataño, and the actress shows us the struggle that goes on within her as she slowly realizes the cost of her husband’s authoritarian attitudes. The director was fortunate to have Fernando Soler playing the father. In the hands of a less gifted actor, Sr. Cataño could have become nothing more than a monster. Soler plays the role forcefully, and at times he’s terrifying, but he also brings depth to the character, allowing us to see the moments of doubt and uncertainty that make him human. 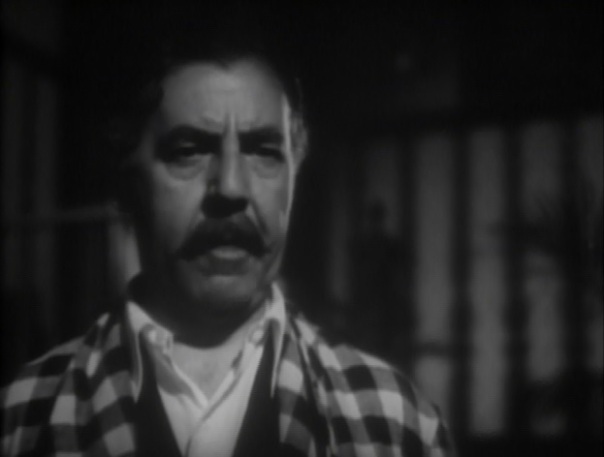 Honestly, the entire cast is excellent. Galindo shows his skill with actors, not only eliciting fine individual performances, but making the ensemble feel like a real family. The morning chaos in the bathroom, the subtle glances at the dinner table, the whispered conversations behind closed doors, all add up to a richly detailed portrayal of life in a middle class household. As for the visuals, Galindo’s style is simple and straightforward. He often lets the camera hold a master shot, observing the actors as they play out a scene, cutting only when necessary. He seems to know intuitively where to place the camera, allowing it to serve the actors, telling the story with a fluid, unpretentious ease.

You may be asking why the screenshots I’m using to illustrate this post look so fuzzy. It’s because I was working from a cheap DVD where the source material looks like it was 16 mm and the transfer is less than stellar. Sadly, this is currently the only way you can view this movie. I posted on another Galindo film a while ago, and complained about the fact that his work was only available in sub-standard releases with no subtitles. Really, this is true of the vast majority of Mexico’s cinematic output, and it’s a terrible shame.

I was encouraged recently when I heard that MOMA was showing a Mexican noir series. Hopefully this will encourage more people to explore the country’s cinema. Una familia de tantas is just one of many remarkable movies waiting to be discovered by English-speaking audiences.

*
I’m sure many readers will be startled to learn that the central character is a fifteen year old girl who’s being groomed for marriage. These days we see this as deplorable, but in post-war Mexico it was an accepted part of the culture. We can condemn it, but we should be keep in mind that American cinema from the studio era is filled with attitudes that seem pretty shocking today. 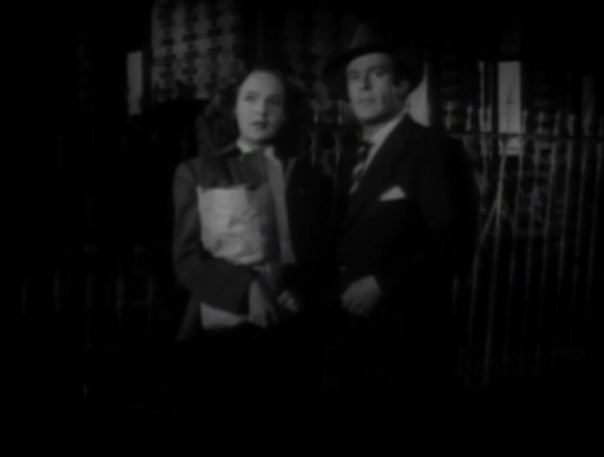