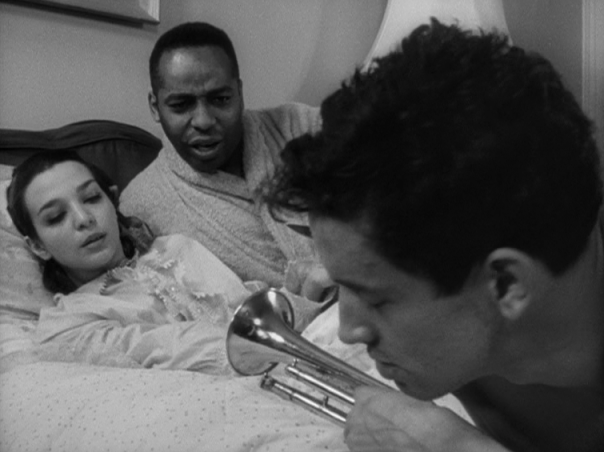 An intense young man walks the streets of New York while a moody, abstract bass line murmurs to us in the background. A young woman stops under a bright theatre marquee to check out the lurid display as a rambling solo sax underscores the scene’s sexual tension. In John Cassavetes’ Shadows, the jazz soundtrack doesn’t just complement the visuals, it’s an integral part of the director’s approach. The spontaneity and sensitivity of the music reflects the loose, open-ended feel of the movie. It’s not just a different style. It’s a different way of thinking about film.

The credits tell us that Shadows was improvised, which isn’t really true. It did grow out of improvisations by the actors, and Cassavetes was open to their inspiration during the shooting. But even if there wasn’t a traditional script, the director had definite ideas about the film’s shape and structure. Cassavetes knew where he wanted to go, even if he didn’t always know how to get there. It was his first film, and he has acknowledged that it’s uneven. Shadows may be messy and chaotic, but its loose, freewheeling approach allows the actors to connect with us in ways they never could in a more conventional film.

Just as a jazz musician takes a melody and makes it their own by opening themselves up to the moment, Cassavetes and his collaborators start with a basic structure and allow themselves the freedom to be spontaneous. They’re not locked into the demands of a commercial film, where the story is crucial and everything is planned and prepared. They take chances, they make mistakes. Sometimes this approach doesn’t work, and the film just seems amateurish and ragged. But at other times it gives us moments that seem remarkably true. An uncomfortable silence that says more than any words could. An awkward gesture that reveals a character’s insecurity. These sparks struck by accident illuminate the film. They give it an immediacy we don’t often see on the screen.

Shadows has been praised for its originality, and in some ways it did blaze new trails. But Cassavetes had his influences, and to a degree the film was an outgrowth of trends that had begun to develop in the late forties. After WWII, many filmmakers had started to venture away from soundstages and shoot their movies on real locations. Europeans, especially the Italian Neo-Realists, had forged a new kind of filmmaking that was rooted in everyday life. And in New York in the fifties there was a growing movement to create an independent cinema. Morris Engel, Shirley Clarke and Lionel Rogosin had all made low-budget films using actual locations.

The film centers on three siblings living together in New York. The three are played by Hugh Hurd, Ben Carruthers and Lelia Goldoni, and the actors’ first names are adopted by the characters in the film. Hugh is the oldest, a singer who’s having trouble getting gigs. Ben, in the middle, plays trumpet, though he’s more interested in partying than making music. And Lelia, the youngest, seems to just be trying to find herself. Shadows doesn’t have a central story. Or rather, it tells a few different stories, and they overlap in interesting ways. The characters hang out in bars, go to parties, make love and have fights just like real people do. The film doesn’t build to a conventional climax. There’s no tidy resolution at the end. Hugh, Ben and Lelia just go on with their lives.

The music in Shadows is by Charles Mingus and Shafi Hadi, but apparently recording the soundtrack was just as chaotic as the rest of the production. From what I’ve read, Cassavetes wanted Mingus to compose the score, but apparently the two had a series of disagreements, which may have had to do with money or deadlines or both. No two accounts I’ve read agree on the details, but little of Mingus’ music ended up in the final film. Apparently Cassavetes worked with Hadi on recording the sax solos that make up most of the score. However difficult the process was, the end result gives the movie a tone that is absolutely unique. The cues are discrete pieces, reflecting the mood of the individual scenes. And the freedom we hear in the music is completely in tune with the spirit of the movie. It doesn’t tell us what to feel. It allows us to feel.