With the holiday season in full swing, I’m going to be taking some time off. I won’t be posting again until around the middle of January. Hope all of you have a safe and happy new year.

And whether or not you celebrate Christmas, remember it’s better to give than to receive. Keeping that thought in mind, I hope you’ll take a minute to visit the National Film Preservation Foundation web site. In recent years the NFPF has been involved in many worthwhile restoration projects, including a John Ford comedy thought to be lost, an early Fleischer Bros. cartoon and portions of a silent film that Alfred Hitchcock worked on. If you’d like to support their work, or even if you’d just like to learn more, click on the link below.

Often a filmmaker’s most original work is the work he does outside the system. The constraints that directors have to deal with in making a commercial feature can tie them in knots. Producers who invest large sums of money in a project generally want something safe because they feel that’s the best way to turn a profit, which is why so many of the films we see have a ring of familiarity. A director may set out to make a movie that’s completely unconventional, but by time they’ve finished negotiating with the money men their groundbreaking work of art often becomes a rehash of last year’s hit.

Charles Burnett made Killer of Sheep when he was a student at UCLA in the seventies. It has the fearless originality, the breathtaking openness, the disturbing directness that maybe only a young artist is capable of. Working on a shoestring, using unknowns as actors, assisted by a crew you could probably fit in a VW, Burnett just made the film he wanted to. It’s a deeply personal and wrenchingly honest look at life in Watts, a run down, low income suburb of Los Angeles.

The film starts with a brief prologue where a teenage boy is first scolded by his father and then slapped by his mother for not taking his brother’s side in a fight. Early on the message is being drilled in. Violence is a part of life. Get used to it. We can choose not to fight, but we can’t escape the fight. It’s all around us. And the world is always trying to drag us into the fray.

Violence pervades the slowly decaying neighborhood where Stan lives in a small house with his wife and two children. Caught in the act of stealing a TV, a petty thief flies into a fit of rage when one of the neighbors calls the police. A couple of thugs come calling, looking for someone to help them out with a murder. And Stan works in a slaughterhouse, butchering sheep in order to make a living.

The scenes of Stan doing his job are brutally graphic. Sheep are kept in pens until they’re hung up and killed. Their carcasses are carried down a line as they’re skinned and dismembered. Stan is a gentle soul, but he spends his days slaughtering animals and we can see that it’s grinding him down. Trapped in a life he can’t escape, he seems exhausted and dazed. He talks about how he can’t sleep at night. His wife wants him to make love to her, but he rebuffs her. He barely speaks to his children.

Stan may literally be a killer of sheep, but everybody who lives in this depressed neighborhood is caught in a pen, waiting to be slaughtered. Burnett spends a good deal of time showing us the local children at play. They’re just kids, and they play the same games that kids play everywhere, but their aimless, innocent fun often seems to involve fighting, wrestling, rocks and BB guns. Violence bleeds into their lives early on.

This all may sound pretty bleak, but Burnett is so passionately engaged with his characters and the lives they lead that his film has a kind of subdued radiance. Wound up with the suffering and the sadness of Stan’s world is an implacable love that somehow survives. The glorious, eclectic score plays a major part in putting this across. Burnett brings together a variety of artists working in a range of styles, from Paul Robeson to Elmore James, from Scott Joplin to William Grant Still. But it’s Dinah Washington singing This Bitter Earth that reveals the film’s core of love wrapped up in pain. Near the end of the movie Stan and his family return home after a flat tire ruins their outing. It’s been a frustrating day, but as he’s sitting on the sofa with his wife he suddenly seems able to show her some tenderness. The final scene shows him back in the slaughterhouse, doing his job, but for the moment he seems to have found a reason to keep moving forward. And the last thing we hear before the credits is Washington singing the line, “…This bitter earth may not be so bitter after all.”

Does Anybody Still Shoot on Film? 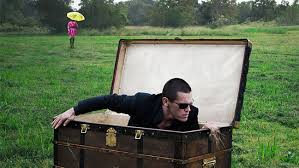 The answer is yes. Spike Lee chose to use film for his remake of Oldboy. Apparently he wanted the movie to have “that analog feel”. The link below will take you to an article posted by the company that provided the cameras for Oldboy. It’s an interesting read, at least for those of us following the digital/analog discussion. In addition to talking with Lee about his reasons for choosing film, the author also spoke with cinematographer Sean Bobbitt. I didn’t realize that Bobbitt had also worked with director Steve McQueen on Shame and 12 Years a Slave, both visually stunning and both shot on film.

Yeah, I know digital is still the standard. I have no illusions about a revival of film. But it’s good to know that filmmakers still have a choice.