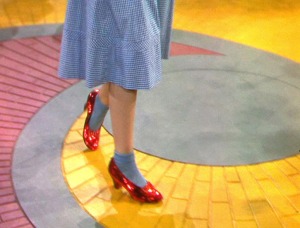 I was standing on Hollywood Boulevard the other day, and I noticed that the Chinese Theatre was advertising a new version of The Wizard of Oz in 3D. I’ve gotta say, this really bugs me.

I have no problem with recent 2D films being converted to 3D, as long as the director approves. If James Cameron wants to re-release Titanic in 3D, that’s his business. But Victor Fleming and his numerous collaborators have been dead for many years, so there’s really no way of knowing whether or not the original creators would approve of this update.

It’s not just The Wizard of Oz I’m worried about. The thing that really concerns me is the precedent this sets. If the 3D Oz is a success, does this mean studios will start a stampede to do the same thing with other classics? I’m thinking back to the eighties, when companies were colorizing movies for release on video. Isn’t this the same thing?

If the theatrical re-release of Wizard of Oz in 3D makes a lot of money, what’s next? Lawrence of Arabia? 2001? Psycho? And now that technology has advanced to the point where 3D is available on home video, does this mean we’ll see “enhanced” versions of The Maltese Falcon? The Searchers? Rebel without a Cause?

Does anyone else see this as a problem? And if so, should we be doing something about it? I wonder if the DGA has this on their radar….