A young man and a young woman are running through a deserted industrial area. The sky is a sheet of black, lit only by dim yellow orbs hanging overhead. The woman stops, and raises her hand.

‘Look. The night. It’s so bright it’ll blind you.’

The young man is Caleb, a cowboy who’s come into town looking for some fun. The young woman, Mae, is a pretty girl he flirts with on the street. Before he knows what’s happening, she has taken him through a door he never knew existed into a world he never imagined. A world where the night is so bright it’ll blind you. A whole new kind of experience.

Kathryn Bigelow’s early films are about people walking through that door. Near Dark, Blue Steel and Point Break all deal with characters who find themselves embracing an ecstatic experience of the world, a kind of experience that is equally exhilarating and terrifying. In Near Dark, Caleb’s world is turned inside out when Mae bites him on the neck. Without even understanding what’s happening, he’s soon travelling with a family of vampires who roam the American Southwest, hunting for prey.

Caleb tries to escape, but finds it isn’t easy to get away. He’s horrified by what he sees, but there’s a part of him that’s drawn to these people who “keep odd hours.” Even though they’re a hundred and eighty degrees from the family he lives with back on the farm, there are strong bonds that hold this clan together. Whether hunting, stealing or hiding, they work as a team, and when the chips are down they back each other up. Jesse and Diamondback are the imposing father and mother figures. Severen is the wild older “son” who enjoys toying with his prey. Mae is more passive, and seems troubled by the life she leads. Homer is the angry, lonely boy who has lived more than enough to become a man, but will always be trapped in the body of a child.

Bigelow and co-screenwriter Eric Red splice two genres together, creating a dark, dynamic fantasy landscape. The western is purely American, and speaks of a clear cut, black and white morality. The horror film hails from the dark corners of Northern Europe, and dares us to step into a terrifying, irrational world. The monsters may die in the final reel, but they live on in our imagination. The tension between these two genres comes across in images that resonate in powerful, inexplicable ways. The shootout at the outlaws’ hideaway becomes a startling, hallucinatory sequence where our hero braves the burning sunlight to stage a daring rescue, and saves his newfound “family”. A barroom confrontation becomes a bloody slaughter, while the jukebox reels out pop tunes in the background. Even a conventional love scene is twisted into something strange and unnerving. Not having tasted blood since his transformation, Caleb is weak and pale. Mae opens a vein in her wrist and offers it to him in order to bring him back to life. He drinks deeply, and feeling miraculously rejuvenated, he kisses her passionately, traces of blood still smeared across his lips.

All this probably sounds like a far cry from the classic westerns of John Ford, but actually Bigelow is a direct descendant of that American master. In fact, among living filmmakers, she is probably the one whose perspective is closest to Ford’s. They are both deeply, unapologetically American, while at the same time obsessively examining the violence and the arrogance that are inextricably woven into this country’s fabric. They’re both poets, relying on a sound, an image, a gesture to express themselves where others would speak to us in words. And they both deal with individuals who find themselves in conflict with their community. The comparison may be easier to see in films like K-19, The Hurt Locker and Zero Dark Thirty, all of which deal with stubborn outsiders who collide with rigid institutions, but the similarities are very much there in Near Dark. It’s a story about a young man who has to choose between the seductive, dangerous outlaw “family” and returning to the safety and comfort of his own family.

In the end, it’s easy for Caleb to choose because his young sister, Sarah, is in danger. But it’s actually the vampires’ humanity that brings about her release and their own destruction. Mae wrests Sarah from the grasp of her younger “brother” Homer. At a crucial moment, Diamondback urges Caleb and Sarah to run. As the sun rises, Homer chases desperately after Sarah, not as a vampire chasing his prey, but as a child who is losing his only friend. He frantically calls her name as his body is engulfed in flames. Jesse and Diamondback clasp hands, knowing it’s all over, calmly accepting their fate.

Caleb frees Mae of her curse, and the two lovers are united. In Bigelow’s early films, her innocent heroes usually walk away a little wiser and not too much worse for wear. But in her later work she has focussed on characters who are more complex, and the moral issues aren’t so clear cut. From The Weight of Water on, Bigelow’s protagonists aren’t just struggling with their fate, they’re struggling with themselves. There are no more happy endings.

Many of the earliest American movies were made in New York. While the center of commercial production shifted to Los Angeles in the teens, low-budget producers were still making films on the East Coast during the twenties and thirties. After WWII there was a resurgence of production in New York, and in the fifties independent filmmakers created a style all their own. Instead of Hollywood fantasy, these films embraced gritty reality. Instead of relying solely on studio sets, the directors often shot in the city streets.

Robert Wise was a product of the studio system. Starting out as an editor, he had worked his way up the ladder at RKO and in the forties he became a director. Early films like The Body Snatcher, The Set-Up and The Day the Earth Stood Still had earned him a good deal of attention. At his best, Wise had a taut, straightforward approach that worked especially well in the world of B-movies.

But Odds Against Tomorrow feels totally different from Wise’s studio work. It has a looseness, a freedom that you don’t find in the director’s lean, suspenseful Hollywood thrillers. I think in large part this is because he was working in New York. It may have been the crew, or the locations, or maybe just stepping outside of the Hollywood box, but this movie stands apart from anything he’d done before.

To start with, the tone of Joseph Brun’s photography is different from anything I’ve seen coming out of Hollywood at the time. Brun’s images are rich and complex, but the light is generally diffused, giving us few solid blacks and bright whites, more shades of grey. The film takes place in winter, and the light feels thin and chilly. It’s also interesting to see how much attention is given to things on the periphery, details that don’t advance the story. Working in Hollywood, Wise was known for a direct, no-frills approach. Here the camera lingers on the shadows cast by horses on a merry-go-round, newspapers flying down an empty street, a pool of water rippling in the gutter.

This wouldn’t just be Brun’s doing. I suspect that this willingness to linger on the details is at least in part the work of Dede Allen. Odds Against Tomorrow is one of Allen’s earliest feature credits, but she had been working as an editor for years. Of course, Wise had started his career as an editor, but the rhythms here are definitely a departure from his previous work. My feeling is that this more creative, intuitive approach is probably due to Allen’s involvement. It seems to point toward her later work with Arthur Penn and Sidney Lumet. Instead of moving relentlessly forward, the film allows us to look around and linger on things that don’t advance the plot. The focus is less on the story than it is on mood, atmosphere, character.

The characters are very interesting. Ed Begley is Dave, an ex-cop who got busted and has fallen on hard times. He seems to be a sensitive, caring person, but he’s willing to do some ugly things to get what he wants. Robert Ryan gives a stunning, low-key performance. He has tremendous authority on the screen, and he uses it to pull us inside characters who are deeply flawed and deeply unhappy. Playing Earle, Ryan manages to keep us with him every minute, even though the man is a bitter, violent racist. 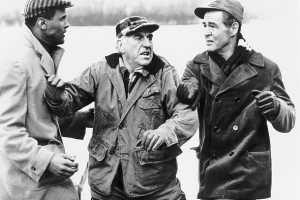 Johnny, played by Harry Belafonte, is the most sympathetic of the three, and also the most complicated. At first he appears to be smart, suave and confident, a talented nightclub performer who’s enjoying a certain amount of success. But as we learn more about him, we realize that his life isn’t nearly as sweet as it seems. The failure of his marriage is eating away at him, and his addiction to gambling has put him in a huge financial hole. And race is also an issue for Johnny, though it’s hard to pin his feelings down exactly. When he’s in his own world he seems completely comfortable with his white friends, but when he sees his wife inviting white acquaintances to her apartment, he can’t keep his resentment from boiling over. Belafonte plays the part with a striking mixture of assurance and sensitivity.

We wouldn’t get such vivid performances if the script didn’t provide such interesting characters. The screenplay was written by Abraham Polonsky and Nelson Gidding, based on the novel by William P. McGivern. As with many of the best heist films, the focus isn’t on the job but on the people. The robbery is a mechanism that allows us to observe the lives of these three men, and to watch how they interact. As the pressure builds, we see each of them slowly starting to crack, we see more of who they really are.

And John Lewis’ music provides a rich, resonant background for all of this. The jazz score is another aspect of the film that ties it to the New York school. There were many soundtracks written in Hollywood that incorporated jazz elements, but in New York the filmmakers often turned to actual jazz musicians. Lewis paints a moody, brooding backdrop for this bleak tale of desperation. He’s not afraid to use dissonance, and his brass arrangements make the tension in the story palpable. For the quieter moments he turns to vibes and guitar, which complement the sombre visuals well.

Wise made a number of excellent films in his long career, and he wasn’t afraid to take chances, to try new things. His openness to different approaches is probably one of the reasons Odds Against Tomorrow is such a striking movie. If he had shot it in Hollywood, it might have been a solid thriller. But I think shooting it in New York made it something more.