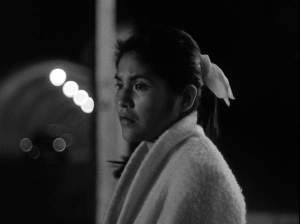 A hundred years ago, the neighborhood in downtown LA known as Bunker Hill was an upscale enclave full of grandiose mansions. After WWI, people with money began leaving the city center for the suburbs, and by nineteen fifty most of the aging mansions had been converted to apartments for working class families and pensioners. By the mid-fifties, the businessmen and politicians who ran LA had decided to raze Bunker Hill, clearing the way for a massive redevelopment project.

Before that happened, Kent MacKenzie made two films about Bunker Hill. The first is a fairly conventional documentary short in which residents give their views on the city’s plans to bulldoze the area. The second is a dazzling, poetic ramble in which we spend the night with three Native Americans who have left the reservation and made Bunker Hill their home.

It’s not exactly a documentary, but it’s not exactly fiction either. The film focusses on three people, Yvonne, Homer and Tommy, who play themselves. MacKenzie interviewed the three to learn about their lives, and then wrote the script based on what they had told him. As we watch the characters roaming through the neon lit streets of downtown, we hear them talking in their own voices about who they are and what they feel. Yes, everything we see is staged, but the three protagonists seem completely unselfconscious. They seem to be giving us an honest account of their lives.

The word documentary is kind of problematic to begin with. We tend to think the term describes a factual account of the world as it is. In reality, most documentaries are staged to some degree, and the filmmakers can’t help but organize the material from their own perspective. Robert Flaherty had his subjects act out scenes for the camera to achieve the effects he wanted. John Grierson believed that film should be a tool to bring about greater awareness and social change, and advocated using the medium to achieve that end. It may seem that Frederick Wiseman is an impartial observer who stands back and lets the world unfold before the camera, but Wiseman himself rejects that view. He insists that his documentaries are not objective, but rather an account of his experience making the film.

And in talking about a movie as vivid and original as The Exiles, why worry about definitions. The film may not be a documentary, but it is a document. It shows a neighborhood, Bunker Hill, once an elite enclave for the wealthy, now a bustling, lower-income community where the streets are brimming with life. It shows people, Native Americans who left the dead-end reservations they grew up on and came to LA looking for something different. It shows places and spaces, streets, bars, juke joints, hotels, tunnels and hilltops. The images are real, even if the scenes may have been staged.

Though the film doesn’t have a score, it’s filled with music. We hear songs jumping out of radios and jukeboxes (including some by the Revels). We also hear Native American chants which take us outside the amped-up sound of city life. Toward the end a group Indians drive to the top of a hill overlooking Los Angeles for a gathering. It’s a place where they can be themselves, where they can drink and talk and sing. We may not understand the words, but it’s clear the music brings them together. It reminds them of their kinship.

Certainly MacKenzie shaped the material, but it feels as though Yvonne, Homer and Tommy are taking us through their world. The Exiles is an invitation to see life from someone else’s perspective. As a pretty square guy living a pretty straight life, it blows my mind to hear Tommy talk about being in jail. “Time is just time to me. I’m doin it outside so I can do it inside.” MacKenzie’s great gift is that he gets people to open up, and then just lets them be who they are.