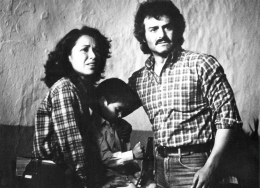 I don’t think I really understand this movie, and that’s one of the reasons I like it so much. At the start I thought I was watching a romantic melodrama. Then I thought the film was pushing a political message. By the end I wasn’t sure how to react. But I can say this movie is beautiful, disturbing and moving.

Gonzalo Vega plays Candelario, a wanderer. At the beginning of the film he walks into a sleepy little town in the middle of nowhere. He asks for shelter at a ranch, intending to stay for one night, and he ends up staying for years. The premise is familiar, but the story takes unpredictable turns. The screenplay is by director Luis Alcoriza and his wife Janet. While they deal with themes that are familiar from other Mexican films, the characters don’t always act the way we’d expect, and the screenwriters avoid delivering any comfortable resolutions. Initially many of the town’s residents react to Candelario with suspicion and fear. Over time some of them come to regard him as a man to love and respect. But he never seems quite sure how to take it all. Should he accept his new life and take the good with the bad, or just walk away from it all?

This ambiguity is at the heart of the movie. Like Renoir, Alcoriza seems to be interested in the way people interact, and doesn’t feel the need to judge his characters. He takes his time in telling the story, and the film has a easygoing, unforced rhythm. Miguel Garzon’s cinematography captures the muted colors of rural Mexico, and Pedro Plascencia’s sparse music has an air of gentle melancholy. I don’t feel like I need to understand this movie completely, because the director isn’t asking for that. He seems to content to let us watch these characters as their stories unfold, and life takes its course.